Back when I first started collecting Makarovs in the mid 1990s, I came across a Chinese Army Makarov at a local gun show. The seller claims it was a Vet bring back from Vietnam. He wanted too much money for it I thought back then. Boy was a I fool, could have had an extremely rare Makarov for under $300. That's water under the bridge now.

I was curious has anyone ever seen the grips I am talking about? The cross hatching on the grips is different from the Bulgarian and the Russian Makarovs. The biggest difference is the star in the center is more pronounced and is surrounded by what I am trying to recall to be either laurel wreaths or small clusters of even smaller stars.

I've seen pictures the kind of grips you are referring to, 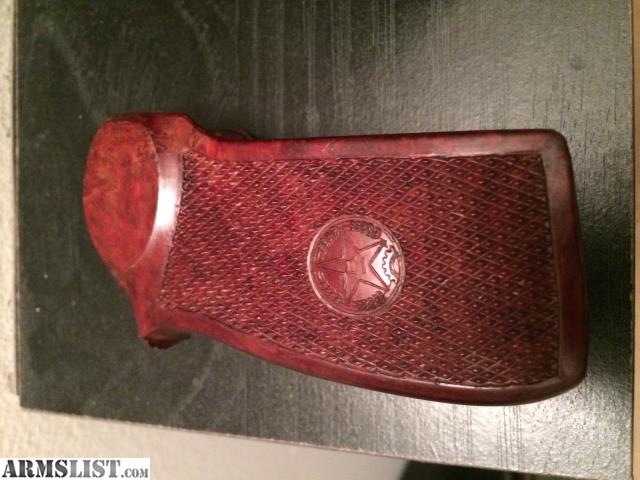 there is also this type of grip

if you expect to try and find one, good luck those are scarcer then hens teeth, and if you do find one, I suspect it will be way, way up there in price.
Last edited by Ghoulardi on Mon Aug 21, 2017 8:45 pm, edited 1 time in total.
COOL IT WITH THE BOOM-BOOMS!! OVA-DAY!!
Top

#1 Example I know of one in a safe secure offsite location.
#2 Example is the one I passed up on so long ago.
Top

I have a set of the grips in the top pic. I had a fellow Makarov enthusiast walk by my tables at a show and was talking about them. Then he pulled one out of his bag to show me and since I have gave him good deals and one or two guns I would have rather kept, he sold it to me for $20.

I had a real nice Chinese Mak once I took in for me but since I didn't have the cash to buy it, the wife told me to put it out for sale on the table ( she likes stupid stuff like electric, food, shelter, meds...). I put a high, don't care if I sell it price on it and sure enough a dealer came over and bought it

. He said he took in a bunch of ammo in a trade and just wanted a gun to shoot it up. Since then I was lucky to find another and paid cash for it and will put the grips on it.
Top

I wish now I had never listened to my ex, putting extra money into savings instead invested in all those $99 EG Makarovs that were available oh so close to both of us back in the mid 1990s. We could have retired by now......
Top


I know the feeling!

I keep telling the boss my collection is an investment but she reminds me it is a poor one. Her logic is sell the guns for more than I paid = profit. Take the profit buy more inventory turn it over for more profit and so on and so on. She did the math one day about a few guns I named and turned out she was right but I said the "happiness" I get from them can't just be measured in dollars....
Top
Post Reply
6 posts • Page 1 of 1