OK, guys & girls, help me out here I'm not really a SMLE expert but I just may have found something so I'd like your opinions on it, its value & a few questions.

I have a chance to get this rifle, sorry for the image quality it was very limited opportunity & I had to do this on the fly.
What I think I know”:

Its a 1914 BSA made No1 MkIII*.
BUT its marked as a No1 MkIII no star, but it has the sights without windage, no magazine cut off, nor is there a slot for one.
Serial No is a 4 digit 924X Numbers match on bolt handle, barrel, receiver ring, nose cap, rear sight, & magazine. There is also another number on the magazine which has been over-struck but might have been50699?

It was FTR'd somewhere in '44 (I think because that's the barrel date).
The sight has the S/A “arrow in a “U” property mark, but nothing else does.
The bolt head is stamped with just a “U”

Markings from back to front.

Other stuff:
the front sling swivel band is the split/hinged type.

The peep sight is a PH 5a, but is oddly mounted.
It looks like they just used the standard rear trigger guard screws first 2 or 3 turns.
The “figure-8 spring on the safety is missing but there's a coil spring between the bracket & safety that's performing the function well enough. But the bracket seems canted both vertically & diagonally.

What can you tell me?
Thanks.
Pics: I can probably get more/better pics if you need something specific please ask.

Oops, forgot.
The sling on the rifle is mine the one laying by it is odd.
the buckles are flip-flopped its impossible to fit correctly unless you put a 1/2 turn in the sling because the rivets face opposite ways at the opposite ends!
Its faintly marked:
"AW & SC (or SO) 1944 (broad arrow)" as best I can tell & the end metal seems to be steel not brass.
Any thoughts on this?
Top

But you could have an extremely rare "the only one of its kind" built 2 years earlier as a prototype.

"When a well-packaged web of lies has been sold gradually to the masses over many years,

the truth will seem utterly preposterous and its speaker a raving lunatic". Dresden James
Top

It is odd isn't it? I should be that lucky! Is there any cross reference to serial numbers & dates? Maybe that would help ID it better?
There are other odd looking things too, like the "FTR" stamp, but no date! I'm inferring the FTR date from the replacement (I assume) barrels date.

If I jump & get it I'll be able to see more dismantle & photograph more & so on, but right now the current owner is understandably against a full detail stripping.
Top

Well I gambled & pulled the trigger on this one.
I pulled the rear handguard to start fixing the San Andreas sized split. All the wood is saturated with oil so I swabbed the mating surfaces with denatured to clean it away & its currently bound together while a layer of gorilla glue sets up. Everything under the wood is glopped with cosmo!
Barrels Knox has a "D" in a circle,
left side marked: (as best as I can describe the stamps)
Crown
X
Crown
F or P
anchor
43
trident
'44
broad arrow

I guess the re-barrel was '44 so maybe also the FTR date?

The bore is excellent clean clear shiny with sharp rifling. The HS passes the .074 with flying colors the bolt handle signals contact with 3/4" remaining at the ball, but doesn't pass the .067" so I'm guessing about 0.069". it passes the bullet test at the muzzle which has a nice crown & the nosecap is nicely centered & about 1/16" proud.

It looks like I'm gong to dry the excess oil, do a detail strip down & remove the excess cosmo, replace a few damaged screws & get the correct rear trigger guard screw to mount the PH5A & call it good!
Top

I found this interesting tidbit.
Can anyone support or oppose this:
"This is just a story, it could be folk law. Maybe it will sound familiar to somebody???

Now I will have to dig to find the source of this, but I have a fuzzy memory of about how a batch of Mk.III* rifles was rejected because they were not to pattern. The jist of the story was that BSA implemented some of the manufacturing concessions early before the spec was official. The Govt inspectors rejected the batch only to approve it later.

A 1914 dated receiver rifle could be built in 1915."
I know it says "MkIII*", but I can't help but wonder did i stumble onto something rare?

Even stranger:
I've acquired a Parker-Hale No5A peep sight for a No1 MkIII (or maybe MkIII*) Lee Enfield, discussion in the linked thread. But it has some interesting features in its own right. While checking for the serial number I discover it doesn't have one, at least not any more!

What it does have is engraved, not electro-pencilled "broad arrow in a U" South African property mark on both the elevator & the mounting adapter plate. Even more interesting is the fact that the "data panels" (manufacturer & serial number Etc) have been scrubbed on both the rear face of the riser column & the inside face of the SMLE mount! The only thing in there is "1936" which I assume is the manufacture date.

I discovered a tale where S/A bought a batch from P-H, but they had to be sanitized as there was an embargo in effect at the time. Can anyone shed any light on this? Is it real for example.
Top

Because of the political 'problems' in South Africa they developed a very competent armaments industry, and, (as far as we are concerned) this included such things as Lee Enfield barrels and their own equivalent to the PH5A sight.
Local manufacture, copies, fakes, call them whatever but it kept SA in armaments.
"When a well-packaged web of lies has been sold gradually to the masses over many years,

the truth will seem utterly preposterous and its speaker a raving lunatic". Dresden James
Top

Yes, I'm familiar with the S/A "DOW" licensed copies of the PH5A sights.
I was thinking more of the scrubbing & stamping of the arrow-in-a-U as opposed to electropenciling it, this is the first stamped one I've seen. Were they all also scrubbed?
Top

Another curiosity, the serial number has no letter prefix, none at all. Just the 4-digits!
Unless the solitary 'F" stamped up 2 lines above the 4-digits is the prefix?
There's definitely something odd going on here, is 924(x) a valid 1914 BSA number or not?
Top

More pics. Better detail on the wrist stamps & a "nekkid" closeup of the missing bits.

Requested pics of the inside of the mag-well. *click thumbnails to enlarge* We're looking for evidence of cutting, re-welding & refinishing the magazine cutoff plates slot.
Personally I can't feel or see it but feel free to look.

Butt to the right showing right side wall. This is where I'd expect the cutoff evidence to be. Can you see anything I can't?

same orientation, but rotated to show the other side of the same area.

& the re-assembled rifle after cleaning, oiling & replacing the rear handguard with one having wings still. It matches well IMO. I used the "heat soak in a black plastic bag with the wood wrapped in paper towels" technique, as it seemed the kindest technique for this old lady. The front dash of a mini-van made a perfect slow cooker & we've removed a lot of excess oil. Its actually cleaning the wood as it pulls crud out of the pores as it rises & you just buff it off with paper towels! Its a little glossy for my tastes but we'll pull more out till it quits sweating & see how it looks at the end of the day.

Now I just have to find a front handguard that matches & has wings!
Top

Quick update.
Ran a UT test there never was a slot, its one single continuous piece of metal.
Top

She sure is purdy
Top

I replaced the rear (lower) handguard which had no fingers, now I just found a front (upper) with fingers so that's getting replaced too. Just waiting for it to arrive.

Needs a bit of setting up, staining to match existing wood, surface fine sanding to remove grain raised & whiskers from factory condition. Nose cap seems grey-green parkerized, so maybe oil, or paint over park to match the rest of the rifle.

That's both sets of ears, front & rear, so I don't roast my fingertips on the rear-sight base any more.
as received. I also cleaned up & oil blackened (thanks Rob) the front nose cap screw which was pretty beat up.
Top

Well the birthday is complete for the old lady. Nothing drastic, just removing a ton of oil from the wood, replacing both handguards for the fingers & to not have the badly split lower handguard it came with. The front metal darkened back nicely with just oiling, so I didn't paint it. The screws were worked on, or replaced to fix the damaged slots & ratty finish.

The new front handguard was made slightly oversize so I was able to make it a snug fit. All it took was some sanding on the bottom to allow the nosecap to fit snugly to the front ferrule & a trim of the back of the fingers as it would drop in at the rear sight. 2 Coats of the walnut dye (made from wild walnuts that grow right behind me) & 7 hand rubbed coats of BLO. Its really close to matching the 100 year old original wood. Just a hair lighter. Every image I see of fingered ones has a slight gap, I made one here too as I guess its like the butt-stock whee there is an intentional slight gap to not beat up the ends under recoil?

I added a piling swivel & a "king screw" sling swivel. I know its not 100% authentic but I have a use for both of them so I did it anyway.

Finally I polished (not ground) the sear face & the trigger bumps with my usual oiled ScotchBrite as they were a bit gritty. Now they're slick & smooth & have a 3 1/2Lb 1st & a 4 3/4Lb second pressure.

I know, Shaddup & show us some pictures! click on the thumbnails for full sized image.

Nosecap details.
(before on top & after on bottom) 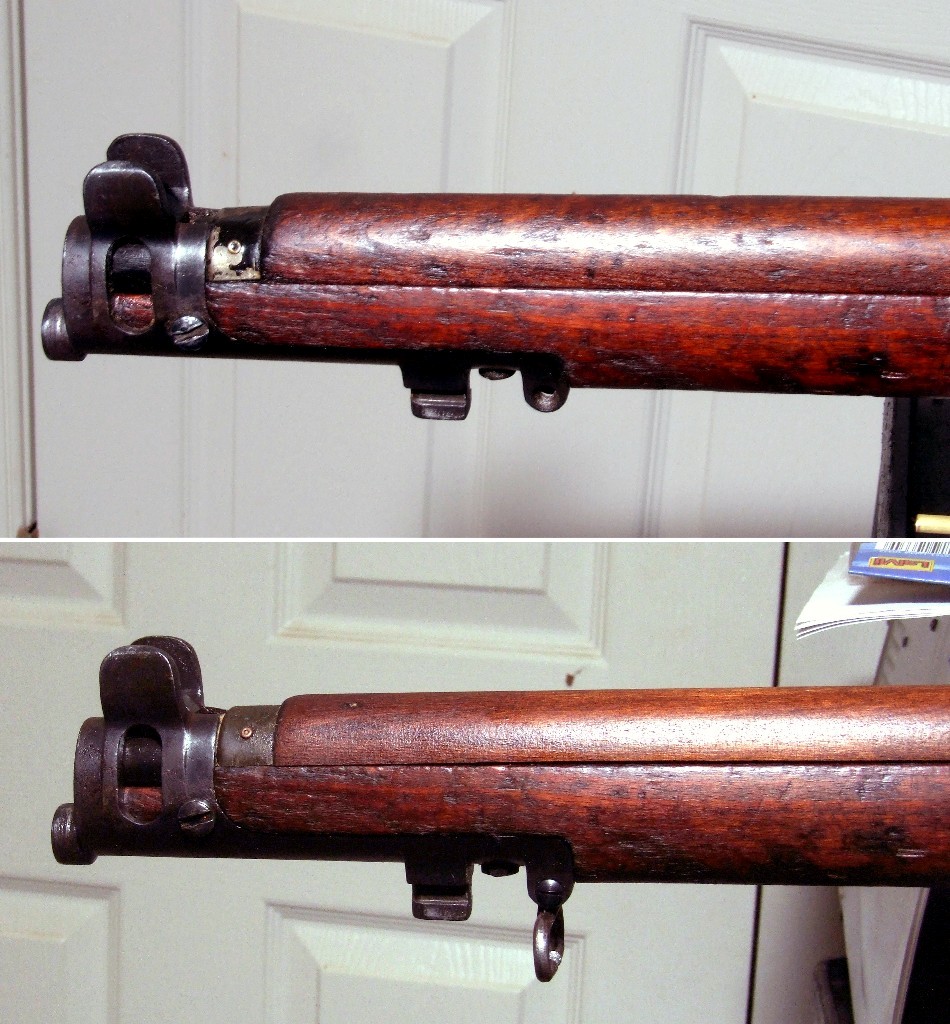 Before (top) & after (bottom) left side. 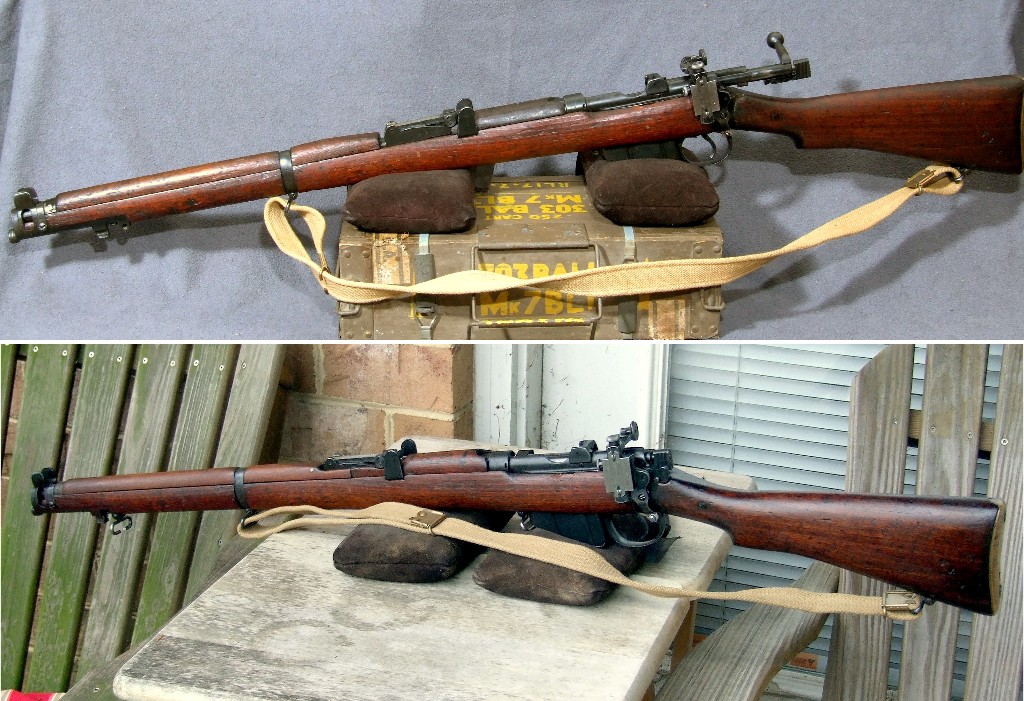 Before (top) & after (bottom) right side. 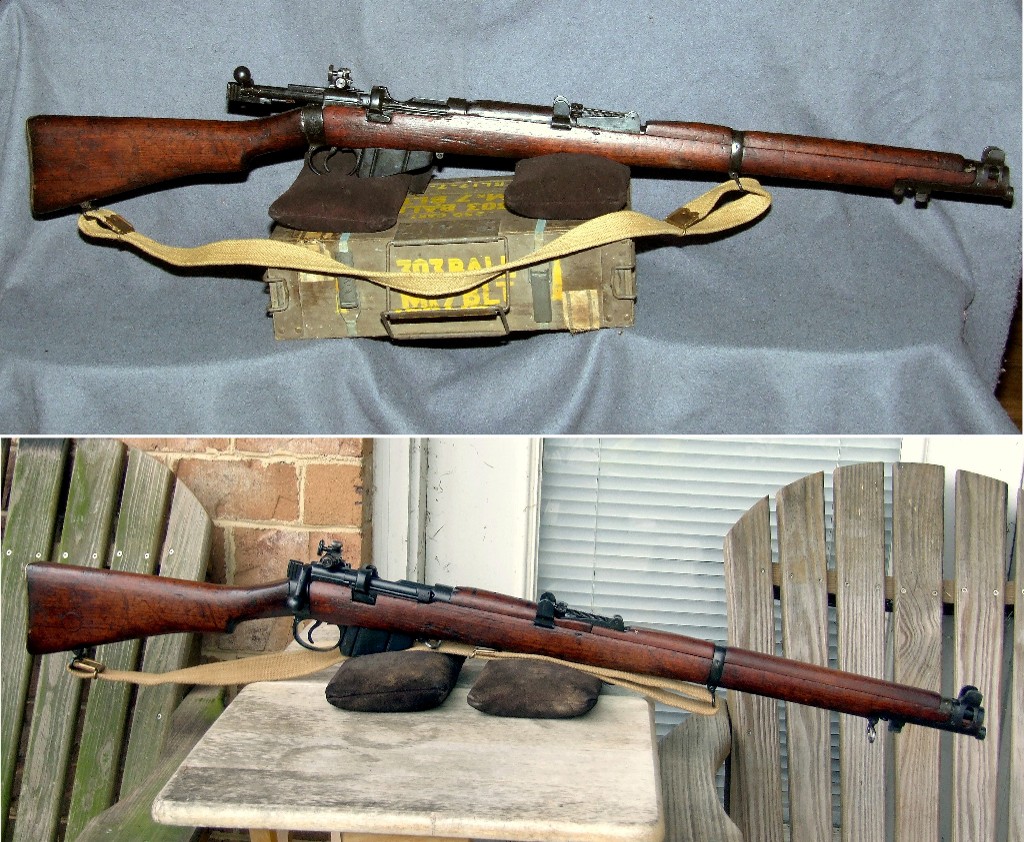 I like the way it came out, keeping the character but nicer. It looks more “Been there & done that” than “Rode hard & put up wet”!
Top
Post Reply
17 posts

Return to “British Empire and Commonwealth”